Great road, great scenery... great villages to pass through and at the eating time, just stop and enjoy the food. In Beaufort be sure to stop and try the local cheese... the fromage de Beaufort. Buy some and enjoy it during your stop at the Barrage de Roselend. There is a nice small restaurant just by the lake (turn left when you reach the barrage to find the restaurant).

Simply one of my favourite roads ever. The Northern end was the perfect cure for a week of riding badly, it starts easy then gets more technical as you go along, tightening into a good number of hairpins with excellent visibility. The Bourg St-Maurice end is very tight and narrow, with much reduced visibility and lots of even tighter switchbacks.
The surface is good all the way and the scenery some of the best Ive seen in the Alps. If youre in the area its a must-ride, but take your time and enjoy it.

Was looking back at some pics of the area and thought Id put a little more into Flumet.
First off all, the Col du Pre that I wrote about is on the map if you zoom right in on the south west side of Lac Roselend. Follow the map and youll see the switchbacks - absolutely wonderful if thats your bag.
Next, after a day (or 3 ) of blasting the Cormet du Roseland, theres a huge, remote, obscure mountain area to chill out in, with some outstanding single tracks and nobody, I mean, Nobody on them. Unlike the Val du Glace, all these roads are tarmac and mostly pretty good (as of Sept 06).
Its called Le Route des Montagnes and, although one can do that particular route, there are numerous offshoots to explore and many will take you back to the 2 main roads(N212 and D909). No cafes hear pal, so pack a lunch and make a morning or day of it. There are several pullout areas with good views and picnic tables.
Again, the whole area is on the map, just zoom right in just south of Flumet and you can follow it (west of N212) - LRdMontagnes does get listed as you get halfway to Ugine on the fatter white twisty road.
Basically youll find the way into the area about 2 miles south of Flumet on the N212 (right turn), about 2-3 miles west of La Giettaz on the D909 (turn left) and either side of Ugine on the N212 and N508.
Nothing is really signposted up here, so keep a sense of direction and just follow your nose - Its a wonderful ride through magic countryside.
Stupidly, I didnt take enough pictures, but was able to post one pic of the mountainsides. However, the area map at a lookout I took a pic of was too large to go on the website. Maybe David can post it here.
Anyway, for anyone not in a hurry, a relaxing, but pay attention day, is Le Route des Montagnes - brilliant stuff.
I had more enjoyable rides throughout this area. The D909 is really fine for about 15 miles going west from Flumet. After that, as enjoyable as the scenery and roads can be, its a case of mixing it up with 4 wheel, 6 wheel, 12 wheel vehicles all in a line - same for the N212 and N508. I find no enjoyment having few places to overtake 30 vehicles, only to find theres another 30 to get round the articulated lorry holding us all up - and when you do get by them all, streaking away into the sunset - a mile later, there are another 50 to get by.
For a biker, enjoyment will begin the moment you cross the bridge at Flumet - moving west - with pace.
Oh, I keep forgetting to add to my posts - do the speed limit through any and all cities, towns, villages, hamlets when in rural Europe, Scotland or Ireland = thats where the coppers nab you. Other than that, your right hand is usually free to rotate.

I have not ridden this one, but have driven it a few times - several years back now - but if my memory serves me half well then it is a cracking place to be, with great views and a wonderful road. Go do it!

An absolute 5 star road and, perhaps, the most beautiful scenery in the French Alps. I road it 3 times in 2 days, spending an entire Sunday under cloudless, blue skies going over my favourite stretches again and again. The section coming out of Bourg St Maurice is narrow for the first 5 miles, be careful. After that, the road widens and it's up to speed. There are a couple of side roads well worth riding. One is at the Val du Glace that winds up towards the base of Mt. Blanc. Just before entering the valley, there's an Inn with lunches to kill for. A second and more obscure pass is Col du Pre, just as beautiful and zero traffic. You find it by going across the dam at Lac du Roselend and continuing over the ridge and onto Beaufort.

Road starts form Flumet up to the Alps, through some small villages with a great view of Chamonix valley. Open and nice curves lead you to the lake of Roseland and then climps up to Cormet de Roseland (~2000m). The way down to Bourg St. Maurice must not be missed. One of the best scenery roads I have every ridden. Great view and lots of closed curves. 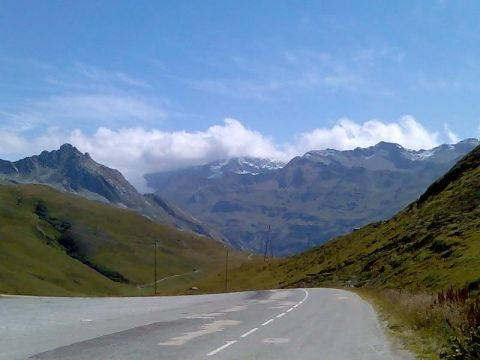 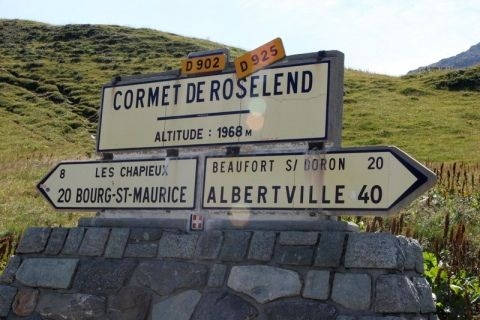 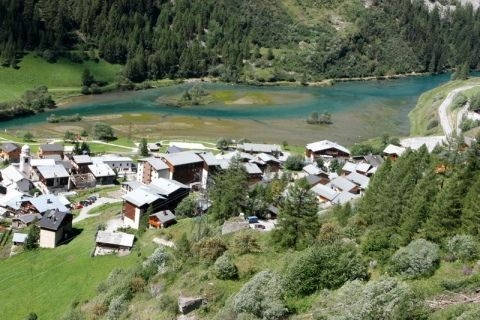 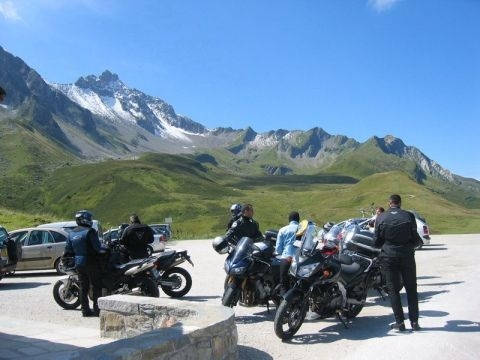 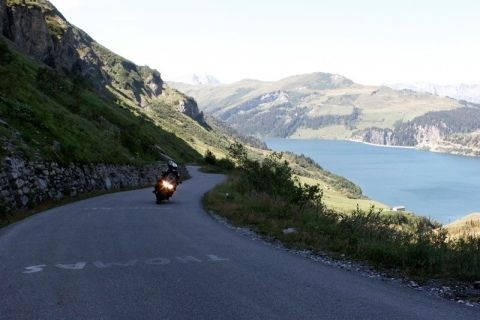 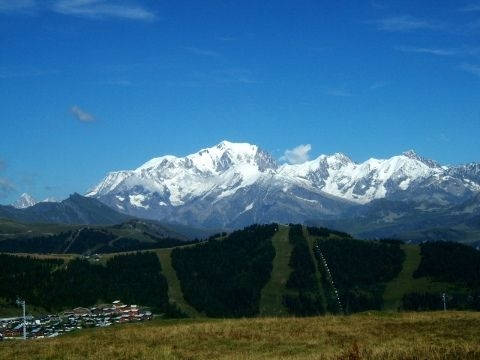 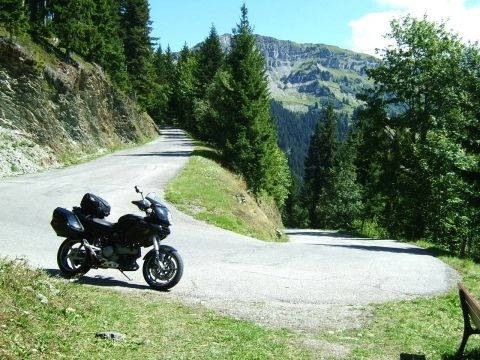 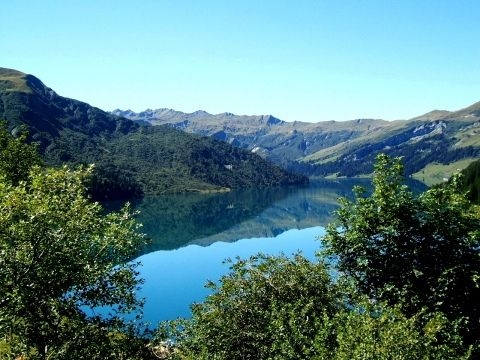 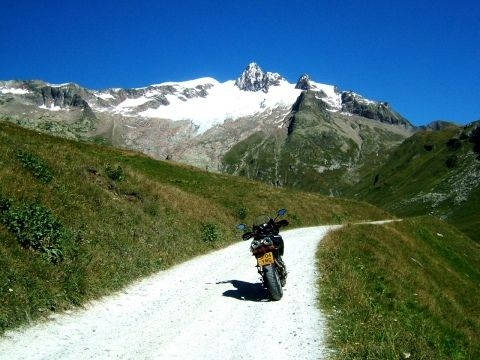 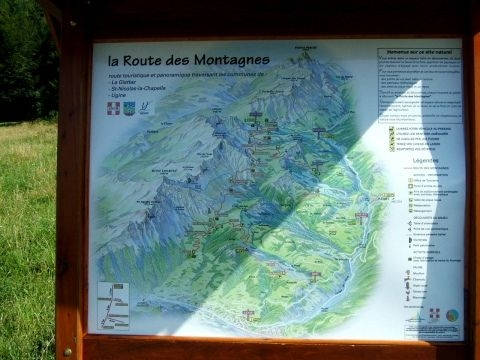 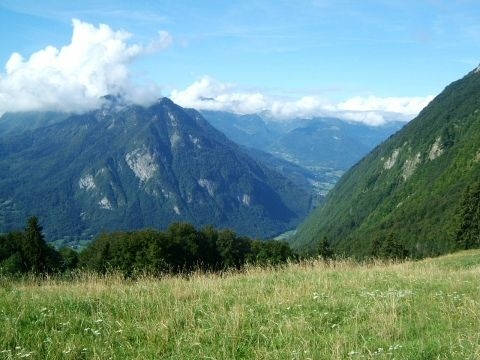 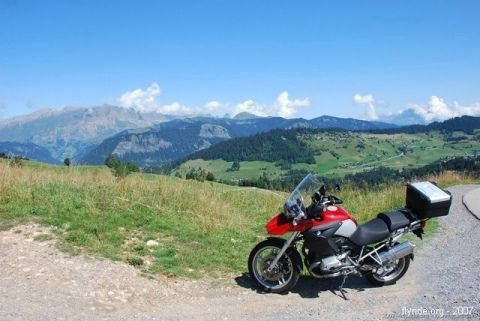 On the way between Flumet (via Crest Voland) and Les Saisies. 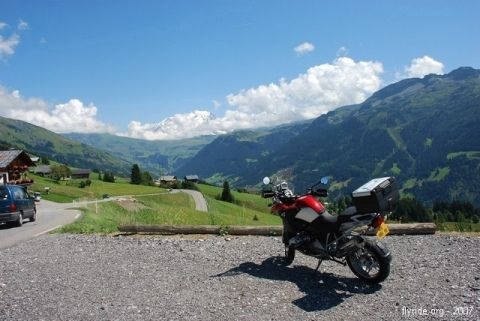 Jusat after Les Saisies, going down towards Beaufort and the Barrage de Roselend. There is this one spot right in front of the majestuous Mont Blanc, its worth a stop-and-look pause! 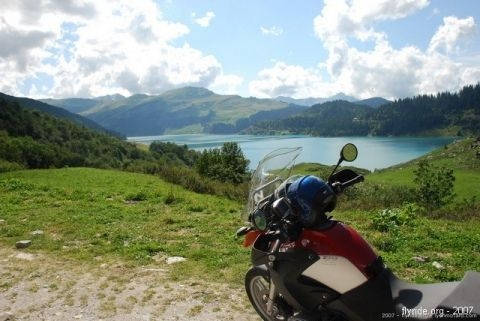 The Barrage de Roselend. The Alps are terrific for riding and for admiring.