This route can be looked at in two parts, both of which can be very fast. From Loch Alsh to New Kelso is by far the better part. One climbs north from the Loch and over the top of the mountain on a road full of open fast sweepers reminecent of the Oberalp Pass climbing out of Andermatt, Switzerland. After that there a tighter, twisty sequence of leading down to Loch Carron where the road turns to a short wide-ish single track as it hugs the Loch, then back into two lanes. The road is so open (even the single track) that begs one to ignore losing their license.

New Kelso to Achnasheen can be one triple digit high speed blast but that would mean missing the scenery (as would the earlier part).

The best of both is, like so many of Scotlands roads, is to ride the road twice = once for the scenery and once for the road.

If you want to totally escape from people then this is where to go. We passed very few cars indeed, and believe it or not, a police biker, who waved at us as he sailed past!
The scenary is stunning, and the road surface mainly good, but there are some single tracks with passing places. Just don get caught short of fuel there, as you really are a long way from civilization.
Fabulous in the right weather.

Apart from a short stretch of single lane/passing places, a fantastic route from Kyle of Lochalsh to Inverness. traffic? what traffic..we must have been the only two on that road

Stunning views on this open and very quiet but fast road, taking in loch views and nice corners and decent straights, well worth a look. 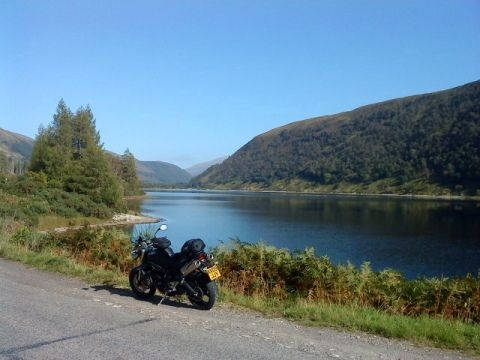