You must ride it

It's a MUST ride! Corners and corners across the mountain. Great scenery.

The N2 used to be a goat track. A very popular heavily trafficed and dangerous goat track. In a country with effectively third world infrastructure, this was a major trunk route, meandering around the terrain like a drunk staggering home. A very long way home. And then EU money arrived, and the entire goat track was suddenly beautifully surfaced, with new bridges and crash barriers, drainage and signage and road markings. But the alignment remains unchanged, and insanely, ridiculously, twisty. Its still 200 miles of ultra-wiggle! But after the EU paid to resurface the N2, it moved on to make it mostly redundant, by funding new motorways linking the Algarve to the north of Portugal, so the heavy traffic also vanished overnight and the N2 was left almost unused by anything other than local traffic between the villages it links up as it wriggles north. In short, and in combination with the glorious weather common in the Algarve, the N2 is a bikers dream. As a road for getting from A to B it is mostly useless. But if you believe that it is sometimes the journey that matters more than the destination, the N2 rocks.

Caveats: The surface is a dream, but there are the odd unfortunate serious blemish caused by an emergent tree route or other similar damage, so its worth keeping one eye on the asphalt ahead. Also, this is Portugal, with some of the most dangerous roads in the EU - probably because it has some of the most dangerous drivers in the EU. Trust nobody and don die of shock if you encounter somebody on your side of the road round a blind corner - just concentrate on avoiding them.

If you start at Martim Longo youll double the fun. Theres one very dificult corner when youre arriving Cachopo, because youll get there with lots of speed since the corners before are quite open

Ridden this road a few times and it never fails to produce a huge smile. With positive cambers on most corners you can be really aggressive and bank the bike over. Be carefull of the odd bit of gravel usually after rain. It is non stop corners. My BMW 1200GS is brilliant on this road, soaking up any imperfections. Cant wait to try the Triumph Street Triple R on it later this year - now that will be brilliant. South of Evora is relatively flat so leave the motorway alone and use this road where the mountain scenery is fantastic.

A twisting road with a rapid succession of corners, physically very demanding if youre a sports rider.
You will start by placing the bike on the right trajectory for the first and second corners, on the third you will be a little off the line, by the fourth you wont care about trajectory or apexes and just cut the corner. Thats because some stretches have no straights between corners so its hard to keep a good line.
The tarmac is reasonable with the occasional small stones on the middle of the road. The camber is accentuated in some corners, but in the right way.
The road is not very wide and is mostly surrounded by trees with some places where you can stop for a view of the landscape high on the Serra do Caldeirão. Please keep a sensible speed while crossing the villages on the route. 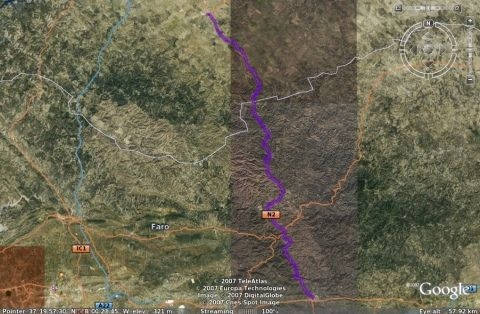