Ive been on this road several times. Its a great ride. Coastal scenery and mountains. There are some historical/archeological sites to see along the way, too. Roman ruins and an old castles ruins are just north of Siniscola, near Posada. More ancient Nuraghe ruins are located about 4-5 kilometres south of Baunei and another a few kilometres north of Baunei. Theres a port at Arbatax, out on the point from Tortoli. The best section is from Scala Manna to Lotzorai, just north of Tortoli. Lots of twisties in the mountiains before you ride down into the coastal and flood plain at that point. There are at least three rivers converging on Tortoli and Arbatax, coming out of the mountains. This was part of a ride I did once when some friends and I did an Iron Butt ride, going around the entire island of Sardegna on a weekend. I lived on the island of La Maddalena for 4 years. If it was paved, we probably rode it.

Running along the east coast of Sardinia, the SS125 is nothing but curves for almost its entire length. Youll be ready for a break by the time you reach the end. The Tarmac is in decent shape and hardly any traffic compared to the mainland! 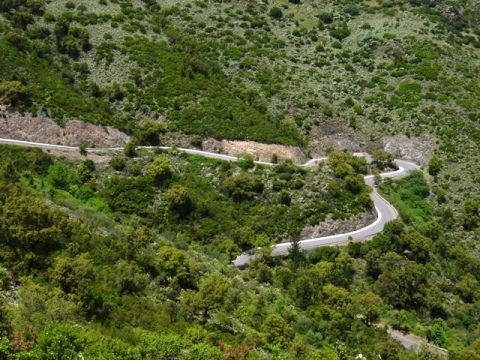